We found out that I was pregnant after a girls trip to Berlin in November. Me and the girls traveled there for the Hertha game and it was already memorable as I managed to leave my suitcase at our front door in Leipzig, while only realising it once we arrived to Berlin. I don’t know if it was my usual clumsiness or the pregnancy hormones working already, but on top of this I was feeling incredible tired and even a little sick during the whole weekend. So I decided to make a pregnancy test on Monday.

I went to the city to get a test and made it straight away upon arriving home. Even though it was already in the afternoon, the positive sign appeared within seconds. I had to calm my shaking self down to be able to take a photo and send it to Pete. I was incredible happy, but at the same time worried already.

The reason for that was that two years before I unfortunately had a miscarriage and straight after a chemical pregnancy, so naturally I knew there’s still a long way to go after a positive test. I will write another post about what I discovered and what I changed in those two years leading up to here. 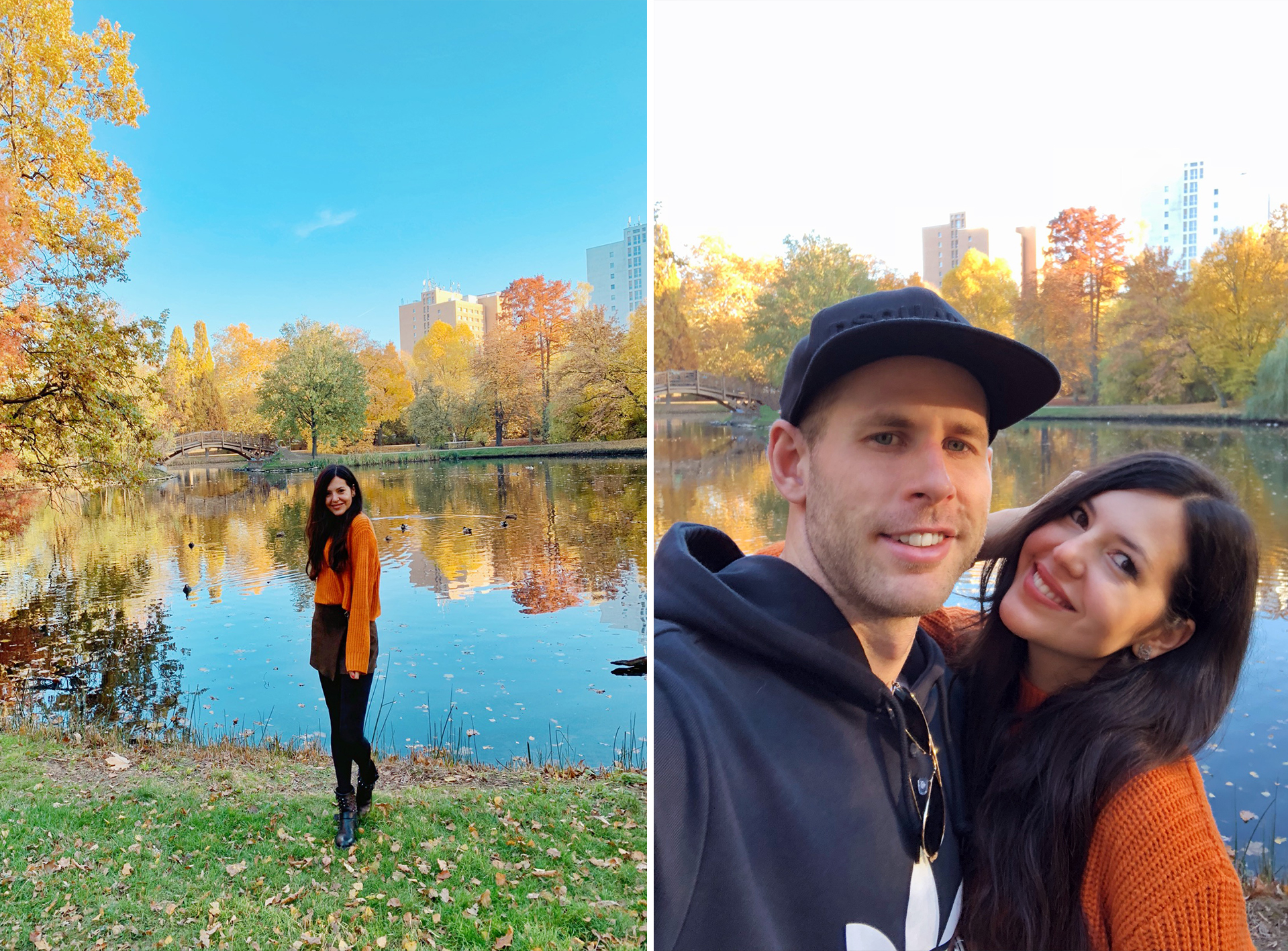 Before the first doctor’s appointment in Leipzig

We got a doctor’s appointment for the next day, where they checked the HCG. A few days later we did an ultrasound, where we could see the sac already, which was the normal thing for a 5 weeks pregnancy. I started using progesterone and Clexane shots to help the pregnancy as much as possible. We agreed with the doctor that we would come back in two and a half weeks to check the development once we were back from the national team break. However, we discussed with Pete that in the meantime we would go to a doctor in Budapest too, as it was such a critical time for the heartbeat to appear. Oh, how I wish we wouldn’t have done that.

So the next week, already in Hungary we visited a doctor. He knew my history with the previous losses, so I trusted him. He did the ultrasound, where he could still only see the sac, but we agreed that I come back in a week and hopefully we’ll see a heartbeat. The next day however, I started to have a brownish discharge, that already got me worried. The doctor told me to wait and see, it can mean lots of things. The day after that I started to bleed fresh blood, so we rushed in to his practice, already fearing that this is over. After checking the ultrasound, he told us that he’s sorry, the baby is gone, the sac collapsed. He also said not to worry, this was such a small pregnancy it will bleed out by itself, no need for an operation. (Thank God!)

We were completely devastated, I don’t wish that on anybody ever. I couldn’t believe that everything I have done was for nothing and we were at square zero again. The next few days I spent absolutely broken, couldn’t sleep, couldn’t eat, just simply miserable. As the days passed by I pulled myself together with the help of Pete. We agreed that life goes on, eventually we will find a solution and have a baby.

Two weeks passed by, we were back in Leipzig, but I still haven’t started to bleed. The small bleeding I had stopped after a day and I just had a brownish discharge for a couple of days after, then nothing. At the same time I had nausea all the time, I was bloated and constantly tired. I was worried that I’m sick from the miscarriage not happening, while Pete joked that he thinks I’m still pregnant just the doctor at home saw it wrong…

Either way, my original appointment for my Leipzig doctor came. We explained to her what happened and she also didn’t understand why would that be happening again. But then came the unexpected SURPRISE when she checked the ultrasound: there was a healthy little embryo in there, with a perfect heartbeat and a perfect size for 8 weeks. This was like out of a movie, I was in a shock, I started crying helplessly, I couldn’t believe it’s true. At the same time, I was also incredibly worried immediately as during the previous two weeks, while I thought I wasn’t pregnant anymore, I stopped taking all the medications and the vitamins, I was doing sports, eating junk food, I was living my life fully not aware of this. But she calmed me that all this doesn’t matter with a healthy pregnancy.  Apparently, the bleeding could have been from many things that is completely normal, especially that I was taking anticoagulants injections.

The weeks after that I was very strict with myself, I spent it almost entirely lying in bed or on the sofa. I didn’t want to risk it again with anything. We went for ultrasounds week by week, always hoping and then seeing that the baby is still developing fine. Pete was taking care of everything in the house and around the animals, he was a true hero. My mum and mother-in-law also came to visit every time the team played away so I wouldn’t be alone. Meanwhile, Eszter, my colleague also performed outstandingly and took care of all the weddings.  I had morning sickness all the time, especially before breakfast and in the car, which was not so pleasant, but I still loved it in a way, as it assured me that the baby is ok. 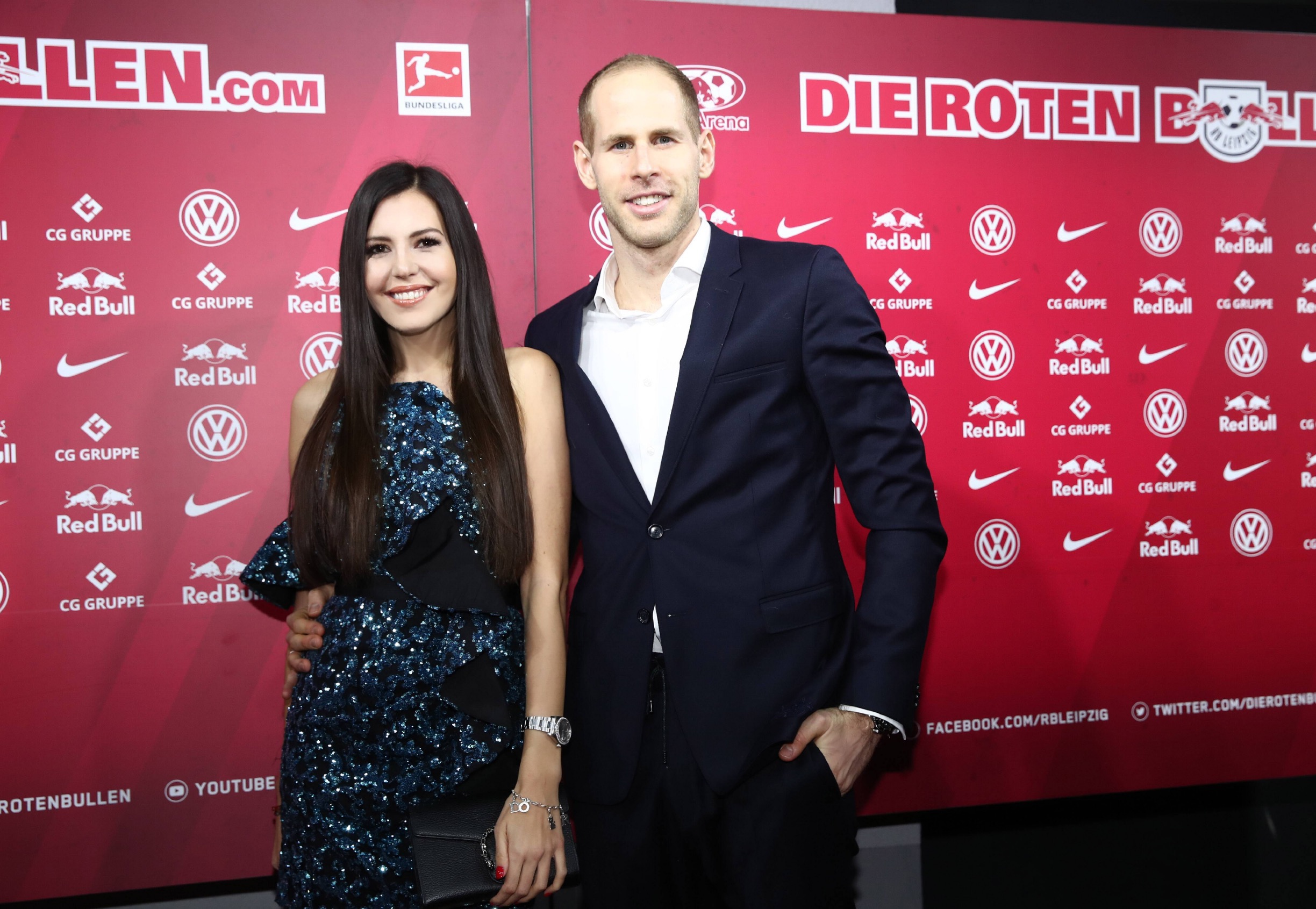 At the RB Leipzig Christmas party, 11 weeks pregnant (my first outing in a long time)

Finally, we got to the 12 weeks mark just around Christmas, when we were back in Budapest for the winter break. The time for the big tests came, meaning the 12-week scan by an ultrasound specialist and the Prenatest. The latter is not mandatory, but I wanted to have it done, as it is the most certain and earliest way of testing for chromosomal abnormalities and also to know the gender of the baby, with a simple blood test done in 5 minutes. The results normally arrive within a week, but for us the waiting was longer due to the holidays. The doctor at the scan found everything ok, so this was a big relief already. 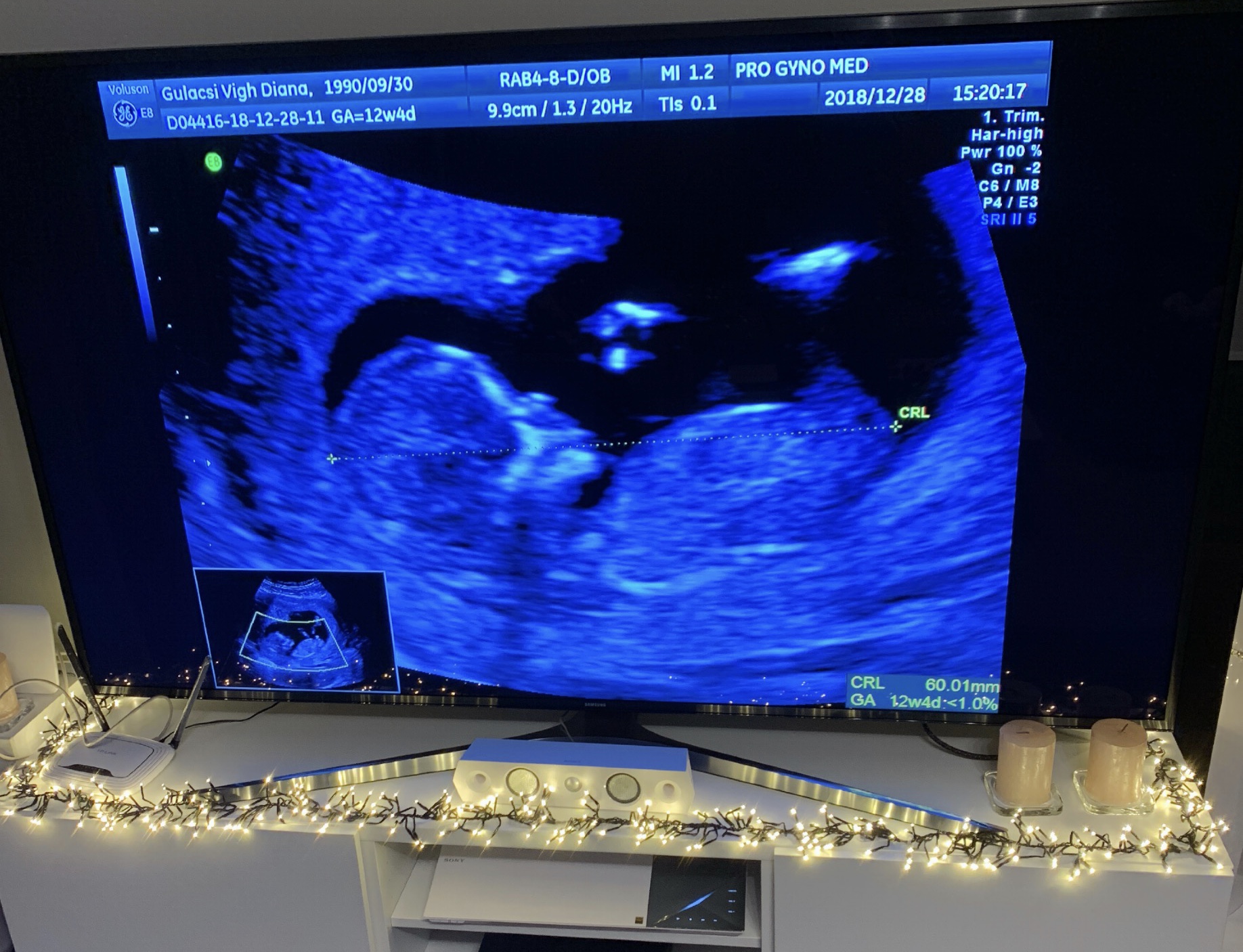 The ultrasound picture from the 12-week scan

The Prenatest results arrived on the 14th January. It was quite funny, as Pete kept calling them everyday about the results, so finally when they received it at Czeiczel, they were so kind and called us late in the evening, knowing how much we worried. We were in the middle of trying to make a healthy pizza (still room for improvement there), so at the end we celebrated with our self-made pizzas that everything is ok. 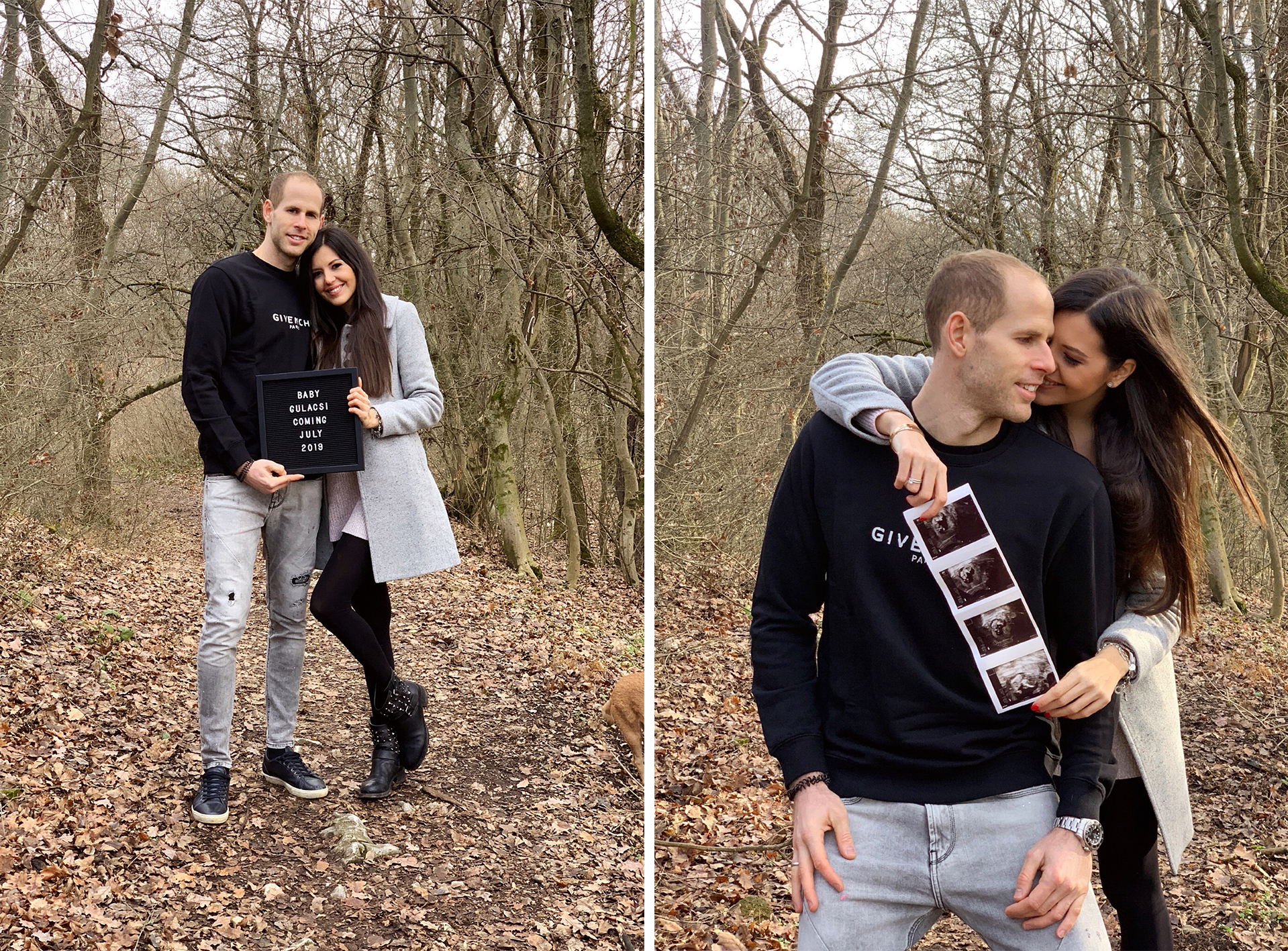 Marking the 12th week in Budapest

The first 12 weeks were definitely a rollercoaster and I thought about it many times how much easier would it have been if I’m going to another doctor in Budapest, but at the end this is how it had to be and thankfully all is good, when the ending is good. Luckily, we forgot about this quickly and we are incredibly excited for the upcoming months and the arrival of our baby!